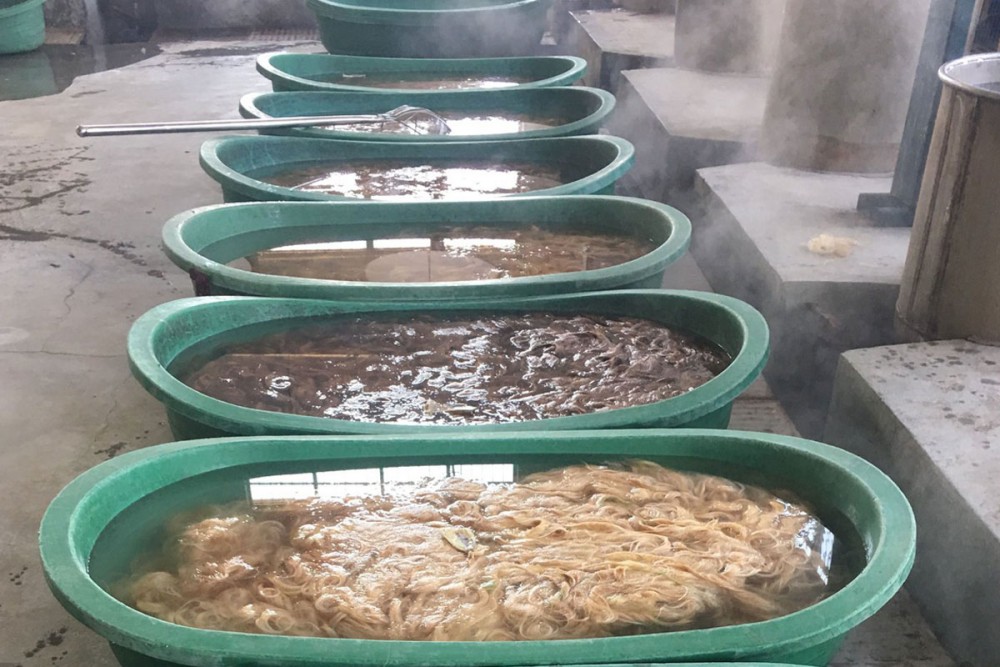 The hair trade exists all over the world and as an industry, it’s thriving, with hair extensions being popularized by pop stars and reality TV icons alike. While these days, you can get high-quality synthetic extensions, human hair is obviously favoured for its longevity and realistic similarities to the wearers own hair or hair they wish they had. There are countless salons worldwide working with hair that has been ethically sourced, usually purchased from reputable companies or working with hair traders who act as the middlemen for the people selling and the companies purchasing. But who exactly is selling their hair? And why?

In many cultures, hair is more than just something fun to brush, style and make you look cute every day. It holds major significance, rooted deeply within their identity, signifying religious beliefs and even sacrificed in rituals - and in case you didn’t know, these are some of the people whose hair you might be clipping in and flipping around.

Hair extensions don’t have the best reputation in terms of traceability but that hasn’t stopped the multi-billion dollar industry from booming, nor the Kardashians showing up on social media with a different length and colour every other day. The lucrative human hair industry is worth about $7B+ worldwide - this figure is inclusive of all uses of human hair, such as and most commonly wigs, as well as; calligraphy brushes, suit linings, furniture, cleaning up oil spills and even an amino acid called L-Cysteine which is extracted from human hair and used to make the dough in your McDonalds, in cosmetics, and hair products.

I came across a ‘Shady’ video on Refinery29, which begins with a wigmaker – who makes wigs for the likes of Naomi Campbell and Nicole Kidman – stating that she and many others in her industry can’t trace the source of the hair they work with. At the time, I didn’t really pay it a second thought. I went on to read stories of women being held down in the street while their hair is cut and stolen, or reportedly being taken from women in labour camps in China, and I decided it deserves a second thought, I was curious.

What I discovered is that the human hair industry is largely unregulated. Sources of hair used for hair extensions and wigs are pretty much untraceable; there is some conflicting information, a few lies and a fair amount of ‘white labelling’ that goes on, but with that being said, there are thousands of trustworthy companies who accept donations, who pay a fair price for hair and whose mission is to help those in poverty by giving people jobs or working directly with hair traders who travel to buy hair directly from willing doners – which for the consumer comes at a much higher price compared to the price the hair is originally sold for at least.

Virgin hair: Hair that is completely unprocessed and intact – it hasn’t been altered by dyes, perms, bleaches or harsh washes

Non-Remy Hair: Has both the roots and the tips mixed up so that all the hairs are not running in the same direction. This type of hair undergoes the shaving off of the cuticles or sometimes the ends of the hair and a machine is needed to untangle it. Non-Remy hair comes at a lower price point, it’s popular and readily available.

100% Human Hair: Typically collected from hair brushes and hair that has fallen on the floor. It is in greater supply and is therefore much cheaper than Remy Hair. Most of the human hair sold today is non-Remy hair because of the method of collection, the cuticle for each hair strand tends to be in all different directions.

WHERE DOES IT COME FROM?

Majority of the worlds Virgin Remy human hair comes from China and secondly from India. Below are just a few examples of how hair might be sourced; these are not exclusive to the countries and people featured below, most are in fact heard of around the world. 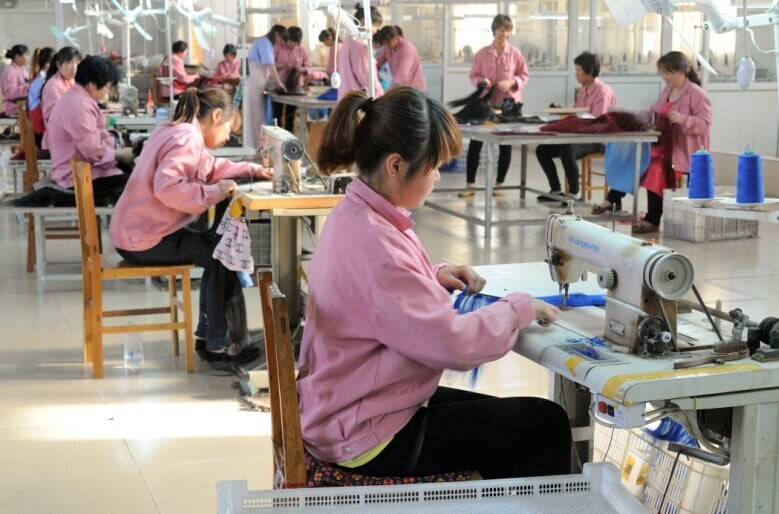 In China, searching through online retailers such as the obvious - Ali Express/ Alibaba- I found prices starting at .30c per strand of hair, other online retailers prices went as high as $1160nzd per kilogram for cuts of 20 inches of virgin Remy. Aside from basic information such as hair type and colour, there isn’t much else and retailers don’t include where the hair is sourced but some did say the hair was ethical.
There are many US hair extension retailers, including Kim Kardashian and J Lo’s hairstylist Chris Appleton’s preferred brand, who state that hair is “collected voluntarily, from healthy women and crafted using fair labour standards using environmentally friendly techniques”, others show photos of happy factory workers wearing pink t-shirts treating hair or making the extensions that later get outsourced to America. 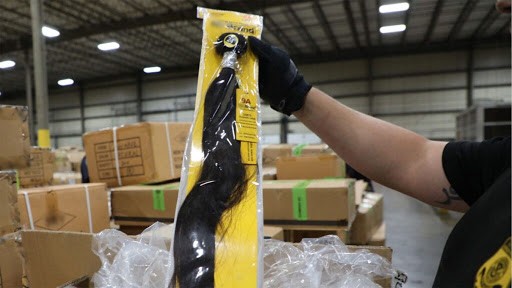 On the flip side, articles circulating from July 2020 state US Border Officials seized 13 tonnes of products made from human hair, which they believe was taken from Muslims in labour camps in China’s western Xinjiang province, where over 3 million Uyghurs are inhumanly detained. "The production of these products is a very serious violation of human rights, and the arrest warrant is intended to send a clear and direct message to all entities seeking to do business with the United States that illegal and inhumane practices will not be tolerated in U.S. supply chains," said Brenda Smith, deputy executive commissioner of CBP's Office of Commerce. 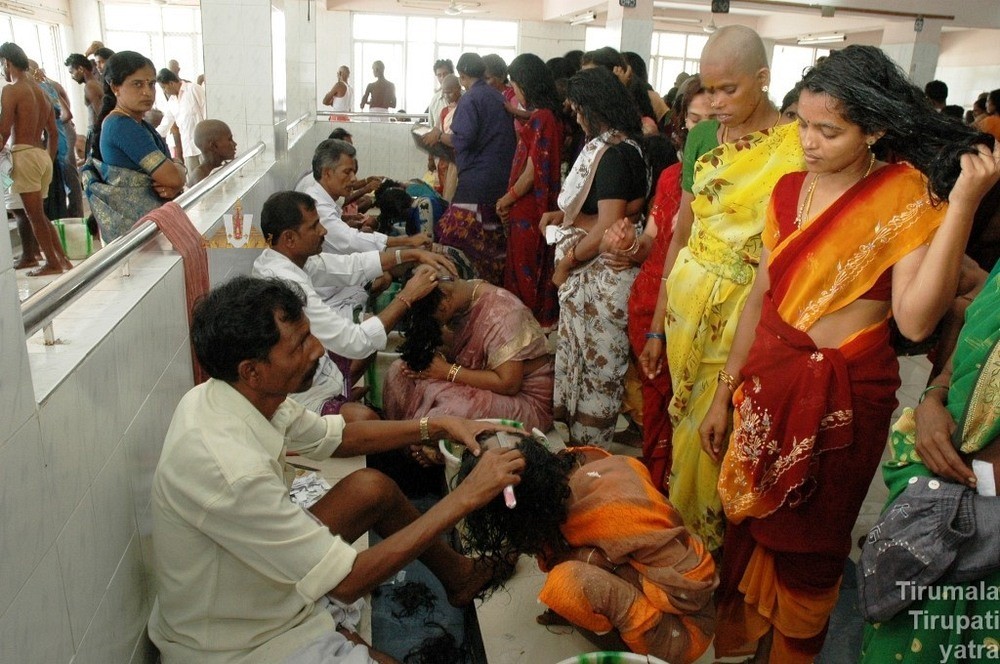 In India, as a ritual of devotion, Hindu people participate in a practice known as tonsuring, where they shave their hair in memory of a loved one, seeking purification or punishment, or to honour a God. Many make pilgrimages to temples such as the Venkateswara Temple in Tirumala, India, where 500 barbers work 24/7 to tonsure the heads of pilgrims – on average they shave 20,000 men, women and children’s heads a day. Where does the hair of 20,000 people go?
Up until the 1960s, the shorn hair was disposed of and thrown into local rivers, however, these days freshly cut hair is collected by ‘temple sweepers’ from baskets or barrels as it hits the temple floor before being transferred to a warehouse, untangled, sorted, washed clean of blood, lice picked out, treated and dried under the sun and sold at online auctions.

The millions made every year is circulated back into local communities for hospitals and education, engineering works, sanitation, vigilance and security. A lot of this hair is sold to Great Lengths International, where it’s being further treated, made into extensions and supplying 40,000 salons worldwide with premium ‘virgin Remy’ hair. While some devotees don’t know what extensions are, or that their sacrificed hair is being sold at online auctions, others don’t mind and simply wish for a blessing from God and beauty for whoever ends up with their hair. 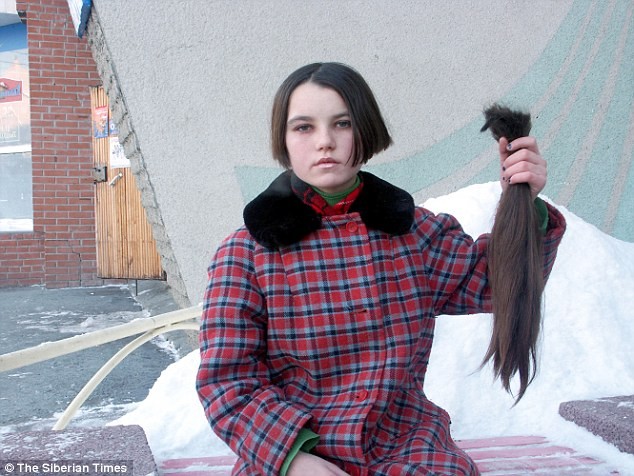 Commonly in Russia, women and young girls living in lower-socio-economic and remote areas sell their hair to hair traders to supplement basic living costs and earn money for necessities for their family. In 2013, Daily Mail reported, “thousands of traders travel across Russia's 13 time zones hosting 'cutting session' fairs in remote towns and cities for those ready to part with their hair for roubles by posting up adverts on lampposts in the places they travel through and on the internet”. Compared to the price you pay for extensions, these women might make around $40NZD for their undyed hair - which is some of the ‘best’ quality hair money can buy apparently. 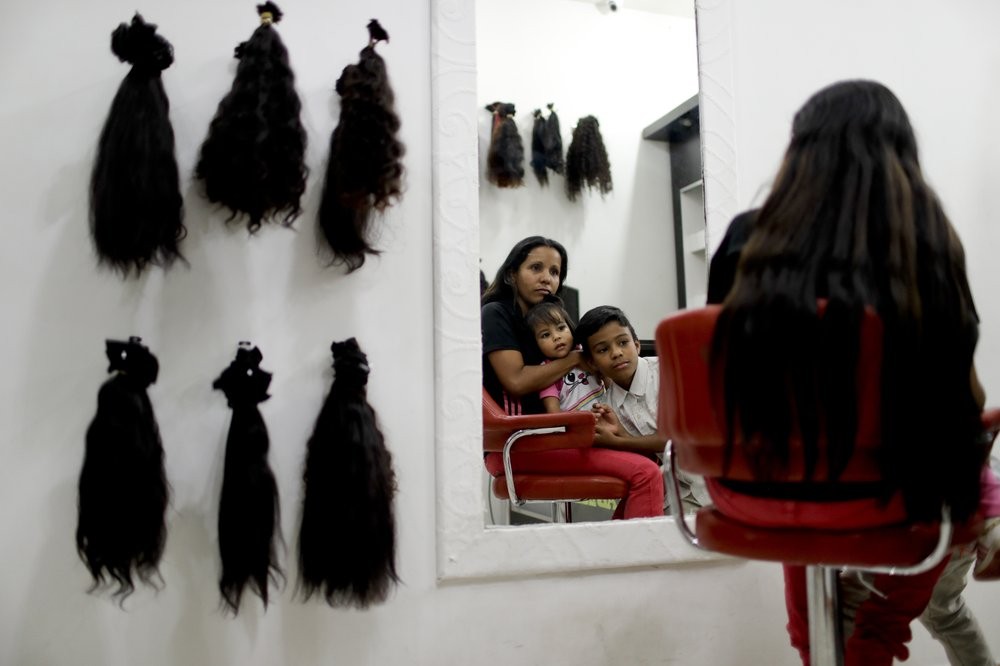 In 2013, the BBC reported that in Venezuela, hair thieves known as ‘Las Piranhas’ – groups of 2 to 3 women – were known to approach women and girls in downtown areas, beaches and malls, where they would hold them down, sometimes at gunpoint to tie their hair and hack it off with scissors. This violence was stemmed from the allure of profit, with the thieves selling the coveted hair for up to $800NZD per ponytail. Since then, due to increased poverty many Venezuelan women from poorer neighbourhoods were known to travel miles to cross the border into Columbia where they would sell their hair to middlemen known as ‘draggers’ or to local wig makers for $85NZD, the sharp economic decline has also seen an increase in women and girls selling their hair directly to beauty salons for around $100 to help their family afford a better quality of life, and able to purchase general necessities such as medicine or food. 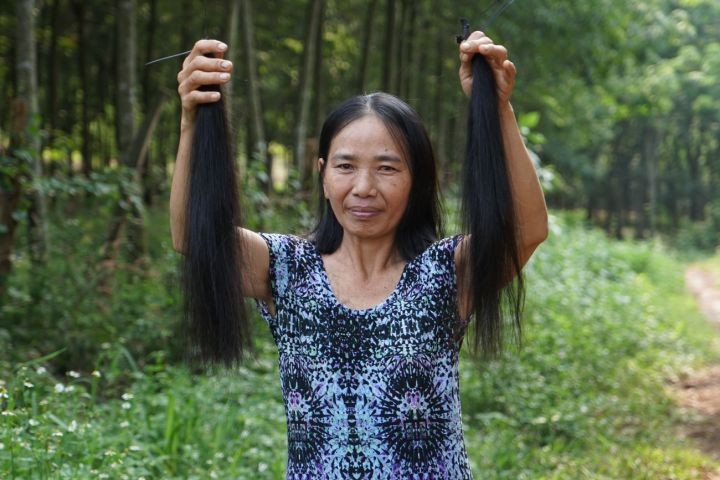 There are many companies trying to make a difference and among them is Dan Choi, founder of Remy NY, based in Ho Chi Minh, Vietnam. Choi personally travels around the country to meet the women who reach out to him to donate their hair, he cuts their hair and pays a fair wage - this higher than normal price means a woman can provide for her family for several months, or pay for education for a year, and in America, his company provides employment opportunities for women who are being trained in making wigs and extensions.

For some it’s a last resort, desperately in need of money to feed their family, for others it’s a sacrifice to God, a donation or maybe it’s even plucked from a plughole. Where ever it comes from, the human hair trade is its own micro-economy, there is a big market for hair and growing demand for lush extensions. 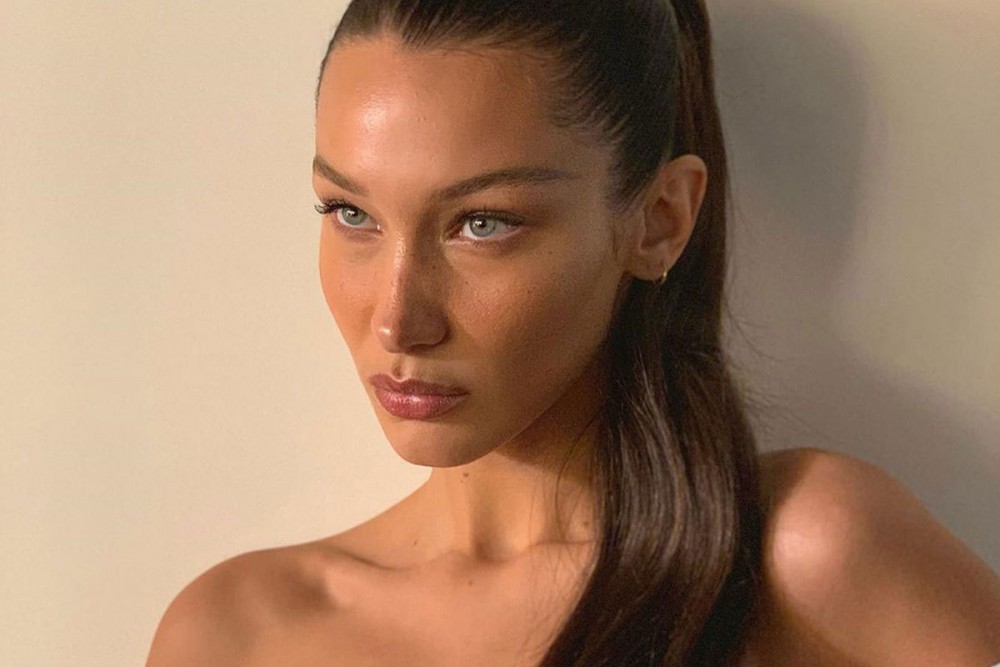 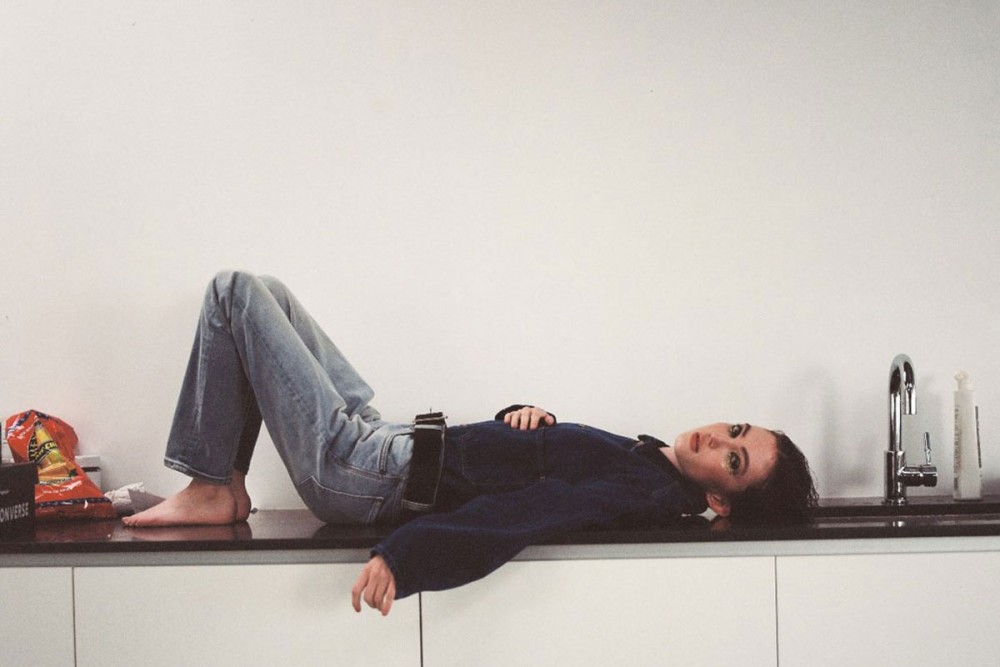 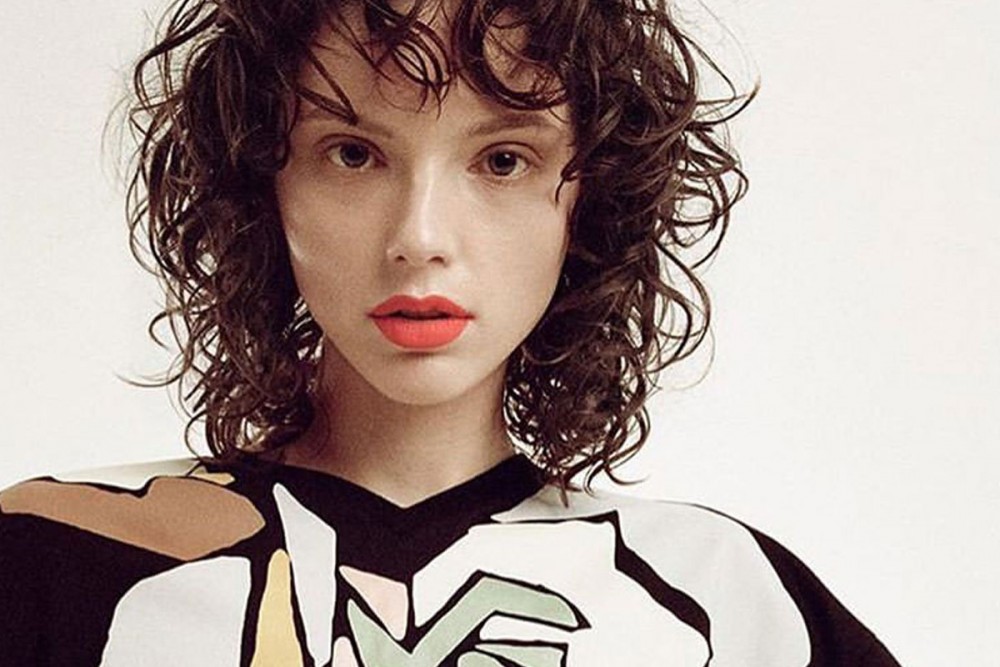